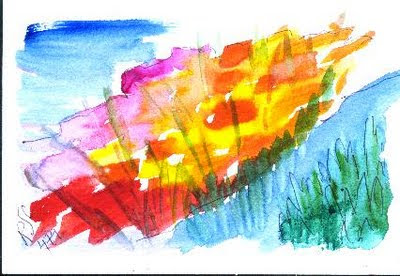 Diane Glancy is one of our country's Native American poets, and I recently judged her latest book, Asylum in the Grasslands, the winner of a regional competition. Here is a good example of her clear and steady writing.

There’s a farm auction up the road.
Wind has its bid in for the leaves.
Already bugs flurry the headlights
between cornfields at night.
If this world were permanent,
I could dance full as the squaw dress
on the clothesline.
I would not see winter
in the square of white yard-light on the wall.
But something tugs at me.
The world is at a loss and I am part of it
migrating daily.
Everything is up for grabs
like a box of farm tools broken open.
I hear the spirits often in the garden
and along the shore of corn.
I know this place is not mine.
I hear them up the road again.
This world is a horizon, an open sea.
Behind the house, the white iceberg of the barn.

American Life in Poetry is made possible by The Poetry Foundation (www.poetryfoundation.org), publisher of Poetry magazine. It is also supported by the Department of English at the University of Nebraska-Lincoln. Copyright ©2007 by Diane Glancy, whose novel The Reason For Crows, is forthcoming from State University of New York Press, 2009. Poem reprinted from Asylum in the Grasslands, University of Arizona Press, 2007, by permission of Diane Glancy. Introduction copyright ©2009 by The Poetry Foundation. The introduction's author, Ted Kooser, served as United States Poet Laureate Consultant in Poetry to the Library of Congress from 2004-2006. We do not accept unsolicited manuscripts.