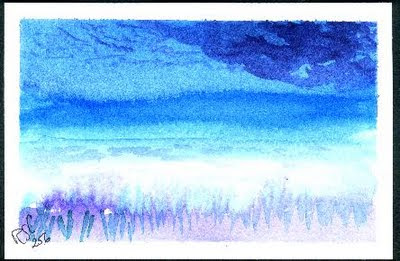 I tell my writing students that their most important task is to pay attention to what’s going on around them. God is in the details, as we say. Here David Bottoms, the Poet Laureate of Georgia, tells us a great deal about his father by showing us just one of his hands.

Sometimes my old man’s hand flutters over his knee, flaps
in crazy circles, and falls back to his leg.

Sometimes it leans for an hour on that bony ledge.

And sometimes when my old man tries to speak, his hand waggles
in the air, chasing a word, then perches again

on the bar of his walker or the arm of a chair.

Sometimes when evening closes down his window and rain
blackens into ice on the sill, it trembles like a sparrow in a storm.

Then full dark falls, and it trembles less, and less, until it’s still.

American Life in Poetry is made possible by The Poetry Foundation (www.poetryfoundation.org), publisher of Poetry magazine. It is also supported by the Department of English at the University of Nebraska-Lincoln. Poem copyright ©2008 by David Bottoms, whose most recent book of poems is Waltzing Through the Endtime, Copper Canyon Press, 2004. Poem reprinted from Alaska Quarterly Review, Vol. 25, No. 3 & 4, Fall & Winter 2008, by permission of David Bottoms and the publisher. Introduction copyright ©2009 by The Poetry Foundation. The introduction's author, Ted Kooser, served as United States Poet Laureate Consultant in Poetry to the Library of Congress from 2004-2006. We do not accept unsolicited manuscripts.