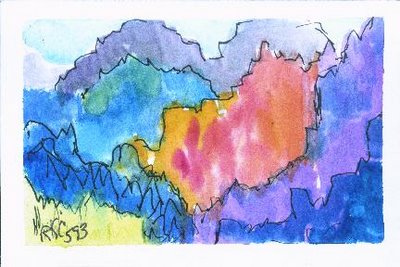 I AM STILL WAITING
For James Mason to come to me,
biting his pipe and taking me in his arms,
comforting me with that wonderful voice of his,
assuring me my evil stepmother will never beat me again,
and the awful headmaster will never have his way with me. I am
still waiting for Shane to return to the boy calling his name
through the echoing hills, still waiting for Dorothy's Someday,
for Scarlet's perfect tomorrow. Though anyone with eyes
can see that Scarlett doesn't have a clue, will never
have a clue, no matter how many sequels she gets.
And Dorothy's stuck in Kansas, and the boy calls and calls.
I wake in the morning, not next to James Mason,
but with you--warm and golden and real as the
sunshine. And mine. Almost definitely mine.
-from everything happens twice; Fireweed Press, 2002 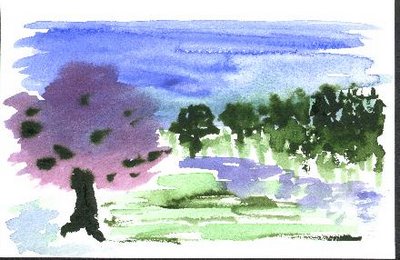 Reflections on the Train

Night insects wash their feet
in the silvered pool of rain
next to a midnight train station.

We move once more,
turning and twisting up switchbacks
through mountain’s belly, sound filling me, humming

inside my head, as we enter tunnels and cross each precipice.
Is safety found in the sharp light of risk
or the blind comfort of darkness?

I count miles of rail and red light,
days, yellow marbles with green centers
like pine trees locked in ice

while a dream left on the mirror of memory,
hangs over the side and snares
buffalo from clouds.

Drifting in vertigo and half sleep, we move into the sun--
it warms my face,
and my feet run through clover. 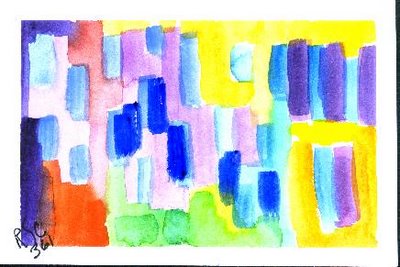 What a marvelous gift is the imagination, and each of us
gets one at birth, free of charge and ready to start up,
get on, and ride away. Can there be anything quite so
homely and ordinary as a steam radiator? And yet, here,
Connie Wanek, of Duluth, Minnesota, nudges one into play.

Mittens are drying on the radiator,
boots nearby, one on its side.
Like some monstrous segmented insect
the radiator elongates under the window.

Or it is a beast with many shoulders
domesticated in the Ice Age.
How many years it takes
to move from room to room!

Some cage their radiators
but this is unnecessary
as they have little desire to escape.

Like turtles they are quite self-contained.
If they seem sad, it is only the same sadness
we all feel, unlovely, growing slowly cold.


Reprinted from "Bonfire," New Rivers Press, 1997,
by permission of the author. Copyright (c) 1997 by
Connie Wanek. Her most recent book is "Hartley Field,"
from Holy Cow! Press. This weekly column is supported
by The Poetry Foundation, The Library of Congress, and
the Department of English at the University of
Nebraska-Lincoln. This column does not accept unsolicited poetry. 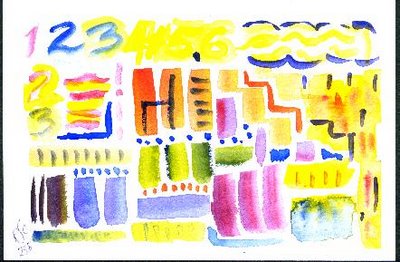 First of all, don’t look for it.
Not in these lines, dots, shapes,
not even in the white spaces-
the small o of oblivion in the curve of the d.

Enter in then, here
right before the first comma
marks the plunge.

Listen.
There’s a harp and a flute and an open church door.
It’s the wedding rehearsal of the brother of the flutist
who is interrupted in his playing, shocked by what he hears
slicing through the ceremonial air – the voice of an unseen woman
to her husband on the street
You should have bought me a Chevy, you son-of-a-bitch!

But why are you attending so to the story?
This is not it.
Poetry only begins with this.

Now,
her words still granular in the air the flutist breathes,
the poem is unwinding between his lips and the instrument.
Listen, just before the air enters,
no, as it falls and swoops,
as it reaches the stops,
but before his finger lifts,
there tingling between the ridges on his fingertips
is the entire story, the low moan of his own divorce, now past,
and the upstairs apartment window
where he will be leaning in shirt-sleeves
on the eve of his brother’s 32nd wedding anniversary. 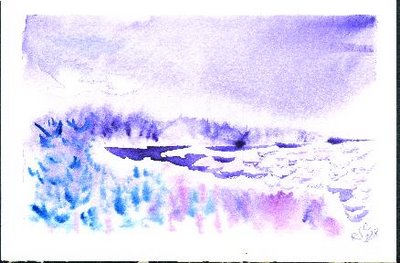 ON THE MOORS, The Brontes

Some shun it here–
call it tree-starved, stunted,
drizzled in mist.

In untrammeled air, curlews cry.
Over bilberry, gorse,
spikes of purple heather,
the earth is a bog that erupted one day–
under blackened skies, peat and mud flowed for miles,
swept away bridges, suffocated fish.
(Papa preached that God unsheathed
his sword, brandished it over our heads.
Be thankful we are spared, he cried.)

Indeed, this ground is a living being
that breathes through our soles,

the air
an infinite undone page,
the wind the voice that dictates. 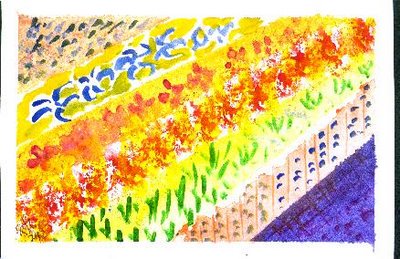 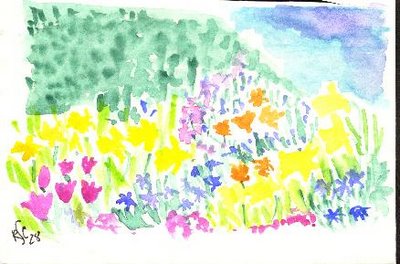 Thousands of Americans fret over the appearance
of their lawns, spraying, aerating, grooming, but
here Grace Bauer finds good reasons to resist
the impulse to tame what's wild: the white of clover
blossoms under a streetlight, the possibility of finding
the hidden, lucky, four-leafed rarity.

The midnight streetlight illuminating
the white of clover assures me

carpet of uniform green, but
to allow whatever will to take over.

Somewhere in that lace lies luck,
though I may never swoop down

to find it. Three, too, is
an auspicious number. And this seeing

a reminder to avoid too much taming
of what, even here, wants to be wild.


Reprinted from the literary journal, "Lake Effect,"
Volume 8, Spring 2004 by permission of the author.
Copyright (c) 2004 by Grace Bauer, whose new book,
"Beholding Eye," is forthcoming from Wordtech
Communications in 2006. This weekly column is
supported by The Poetry Foundation, The Library
of Congress, and the Department of English at the
University of Nebraska, Lincoln. This column does
not accept unsolicited poetry. 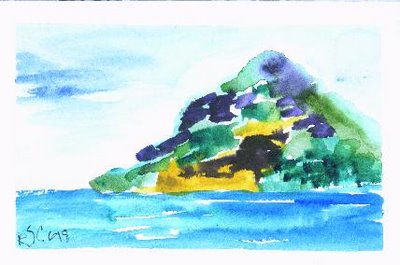 How it feels not to be believed.
In the dream, they are having a party
or doing their work on the boat,
while I am swimming in circles,
hoping someone will notice.
I don’t know where to start.
This is a story that needs
to be told.

The boat when I was young was on
a running line, drifting out with river’s tide.
I hauled it in hand over hand,
first the harsh threads of dry hemp
then seaweed-dripping rope I threw in loops.
Water ran down gray-painted wood
to wake up fishy smells in the bottom.
I don’t know why sadness attacks me now;
I can hardly keep my eyes
open for sorrow.

The ladder is slick and strong. I could almost
get up but I need a hand at the top.
Where is the one who will listen?

I slid the oars clattering into the open shell,
stepped on board, shoved off into the current
judging the tide before taking off
all my pride in doing it on my own.
Now I dream of blue seas
where I call out for help.

-This poem was a finalist in the contest Writing the River and will be forthcoming in the volume with that title (Word Street Press, Pittsfield MA).
Posted by Robin Chapman at 3/08/2006 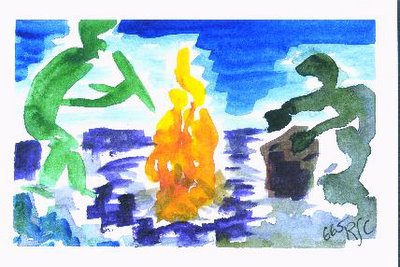