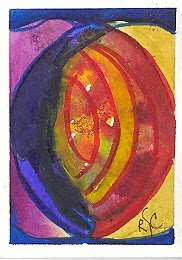 Earth Behind Me, Blue and Bright

Reject the tunnel told by others,

the finish of radiant beams, the beloved

escort, the arms of mother.

Let imagination be the vehicle for dying.

Let’s say it is a dog shaking water from her coat,

who wets the clothes of those who stand here, crying.

Or maybe it could be the campfire’s sound

when the men who built it rise to move along

and douse it from above. Or a song sung in rounds

that always begins again as soon as it is ending.

A crate of pheasants hatched and old enough

to be released into the fields. We think of it as sending,

the way we get from one place to another,

the transport of the special DNA or Higher Self

we picture as eternal. It could be a hand that smothers

or a tamping down until we can’t be found.

We want a grander place, the brush with God!

But at the grave we cannot help but eye the mound

of dirt, though it is covered by a tarp, and worry

over its weight and density. Let’s say the end

is clay mixing with water, a slurry

of our insoluble parts. Or the church bells

just before the clapper strikes. A lowering

of rope into a cavern, the smell

of minerals, the wheeze of your own breath.

it’s death biting the tail of its own death.