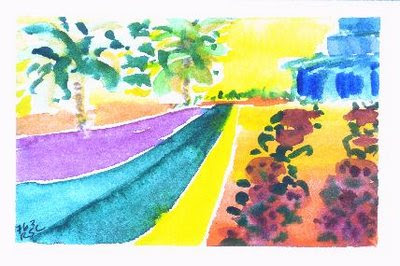 Sometimes I wonder at my wife's forbearance. She's heard me tell the same stories dozens of times, and she still politely laughs when she should. Here's a poem by Susan Browne, of California, that treats an oft-told story with great tenderness.

On Our Eleventh Anniversary

You're telling that story again about your childhood,

when you were five years old and rode your blue bicycle

from Copenhagen to Espergaerde, and it was night

and snowing by the time you arrived,

and your grandparents were so relieved to see you,

because all day no one knew where you were,

you had vanished. We sit at our patio table under a faded green

red stars of roses along the fence, trellising over the roof

of our ramshackle garage. Too soon the wine glasses will be empty,

our stories told, the house covered with pine needles the wind

has shaken from the trees. Other people will live here.

We will vanish like children who traveled far in the dark,

stars of snow in their hair, riding to enchanted Espergaerde.

American Life in Poetry is made possible by The Poetry Foundation (www.poetryfoundation.org), publisher of Poetry magazine. It is also supported by the Department of English at the University of Nebraska-Lincoln. Poem copyright (c)2007 by Susan Browne, whose most recent book of poems is "Buddha's Dogs," Four Way Books, 2004. Poem reprinted from "Mississippi Review" Vol. 35, nos. 1-2, Spring 2007, and reprinted by permission of the author and publisher. Introduction copyright (c)2009 by The Poetry Foundation.  The introduction's author, Ted Kooser, served as United States Poet Laureate Consultant in Poetry to the Library of Congress from 2004-2006.  We do not accept unsolicited manuscripts.