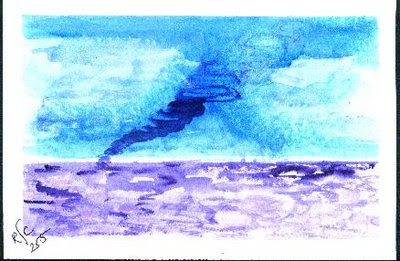 Bill Holm, one of the most intelligent and engaging writers of our northern plains, died on February 25th. He will be greatly missed. He and I were of the same generation and we shared the same sense of wonder, amusement, and skepticism about the course of technology. I don't yet own an Earbud, but I won't need to, now that we have Bill's poem.

can enjoy private noises wherever you go,

protected from any sudden silence.

Only check your batteries, then copy

a thousand secret songs and stories

on the tiny pod you carry in your pocket.

You are safe now from other noises made

by other people, other machines, by chance,

noises you have not chosen as your own.

To get your attention, I touch your arm

to show you the tornado or the polar bear.

Sometimes I catch you humming or talking to the air

as if to a shrunken lover waiting in your ear.

American Life in Poetry is made possible by The Poetry Foundation (www.poetryfoundation.org), publisher of Poetry magazine. It is also supported by the Department of English at the University of Nebraska-Lincoln. Poem copyright (c)2008 by Bill Holm, whose most recent book of poems is "Playing the Black Piano," Milkweed Editions, 2004. Poem reprinted by permission of Bill Holm. Introduction copyright (c)2009 by The Poetry Foundation.  The introduction's author, Ted Kooser, served as United States Poet Laureate Consultant in Poetry to the Library of Congress from 2004-2006.  We do not accept unsolicited manuscripts.