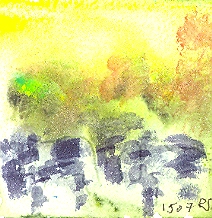 How I love poems in which there is evidence of a poet paying close attention to the world about him. Here Angelo Giambra, who lives in Florida, has been keeping an eye on the bees.﻿

On hot days we would see them
leaving the hive in swarms. June and I
would watch them weave their way
through the sugarberry trees toward the pond
where they would stop to take a drink,
then buzz their way back, plump and full of water,
to drop it on the backs of the fanning bees.
If you listened you could hear them, their tiny wings
beating in unison as they cooled down the hive.
My brother caught one once, its bulbous body
bursting with water, beating itself against
the smooth glass wall of the canning jar.
He lit a match, dropped it in, but nothing
happened. The match went out and the bee
swam through the mix of sulfur and smoke
until my brother let it out. It flew straight
back to the hive. Later, we skinny-dipped
in the pond, the three of us, the August sun
melting the world around us as if it were
wax. In the cool of the evening, we walked
home, pond water still dripping from our skin,
glistening and twinkling like starlight.
American Life in Poetry is made possible by The Poetry Foundation, publisher of Poetry magazine. It is also supported by the Department of English at the University of Nebraska-Lincoln. Poem copyright ©2009 by Angelo Giambra, whose most recent book of poetry is Oranges and Eggs, Finishing Line Press, 2010. Poem reprinted from the South Dakota Review, Vol. 47, no. 4, Winter 2009, by permission of Angelo Giambra and publisher.﻿ Introduction copyright ©2011 by The Poetry Foundation. The introduction's author, Ted Kooser, served as United States Poet Laureate Consultant in Poetry to the Library of Congress from 2004-2006. We do not accept unsolicited manuscripts.******************************
Posted by Robin Chapman at 7/06/2011