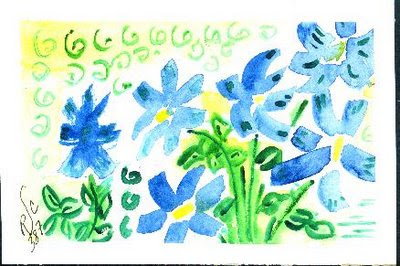 Ah, yes, the mid-life crisis. And there's a lot of mid-life in which it can happen. Jerry Lee Lewis sang of it so well in "He's thirty-nine and holding, holding everything he can." And here's a fine poem by Matthew Vetter, portraying just such a man.

At fifty-six, having left my mother,

my father buys a motorcycle.

I imagine him because

it is the son's sorrowful assignment

to imagine his father: there,

hunched on his mount,

with black boots, with bad teeth,

between shifts at the mill,

ripping furrows in the backroads,

past barn and field and silo,

past creek and rock,

past the brown mare,

sleek in her impertinence,

never slowing until he sees

the bull. He stops, pulls

his bike to the side of the road,

where golden rod and clover grow,

walks up to the fence, admires

its horns, its wet snout snorting and blowing

its breath, its girth, its trampling

American Life in Poetry is made possible by The Poetry Foundation (www.poetryfoundation.org), publisher of Poetry magazine. It is also supported by the Department of English at the University of Nebraska-Lincoln. Poem copyright (c)2008 by Matthew Vetter. Reprinted from "The Louisville Review," No. 63, Spring 2008, by permission of Matthew Vetter.  Introduction copyright (c) 2009 by The Poetry Foundation.  The introduction's author, Ted Kooser, served as United States Poet Laureate Consultant in Poetry to the Library of Congress from 2004-2006.  We do not accept unsolicited manuscripts.